There are great number of people involved in running and facilitating FanWar events, more then can be listed here. But those involved directly in running the events, being Game Masters, and running game worlds for FanWar are listed below. 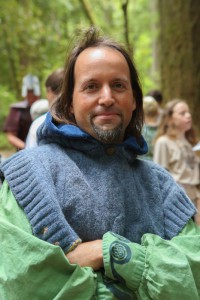 Christopher Melville: (Head Director and Originator) I am a credentialed Montessori School Teacher for children birth to six as well as six to nine and have taught first grade through twelfth grade as well as college courses and can scale an adventure to any age group and any size.
I have a BA in Theater Arts and a BA in Creative Writing, and am a Credentialed Multi-Subject Public School Teacher. I have been running these events professionally for the past twelve years and wrote the book for Fantasy Warplay and have been running my game world Roekron for the past fifteen years continuously.

Anthony Melville: (Co-Originator and Facilitator) Anthony and I developed 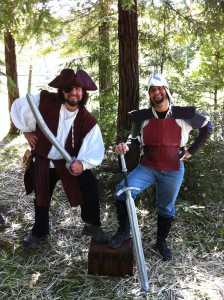 Fantasy Warplay together for our Summer Arts Program over 20 years ago and as such he has been a core element of the game from the start. He has all the credentials I do. He is a Montessori Credentialed School Teacher for children birth to six as well as six to nine, he has taught first through twelfth, he has a BA in Music, and is also a Credentialed Multi-Subject Public School Teacher. He has run entire campaigns for wide ranges of children in ongoing quests and is a masterful storyteller.
Kim Taylor (GM Team Director):  Kim Taylor is the director the GM team.  A core player for eight years now, she quickly advanced through the ranks, proving herself to be a master of plot, analysis, and combat.  She became a Game Master in her own right five years ago, and has been running her own events, as well as working as an assistant teacher for training camps 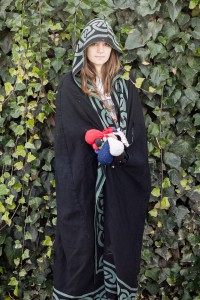 and classes ever since.   She is a gifted storyteller, an epic player in the league, and is working towards a social science teaching credential.  She championed the Synapse LARP after school program, taught many classes for Stanford Splash, and worked as a docent for years at Monterey Bay Aquarium.  Having been a Girl Scout counselor, with numerous child development and theater classes, and a rich history of LARP involvement, Kim’s dedication to the game and her disciplined work ethic makes her uniquely qualified for our team. Kim is also a master weapon crafter, and holds the record for the most consecutive LARP days ever played by anyone in any league. 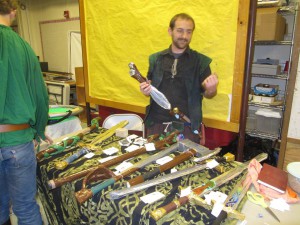 team, over ten years of running events with me.  He has rewritten our rulebook, played everything there is to be in the game, and is currently a science teacher in Petaluma, CA.  Tyson is skilled in the dramatic elements of the game and often brings humor into the scenarios as well as ethical and philosophical dilemma for players to grapple with. His quiet and patient way of explaining things to players often makes the difference for kids having a hard time understanding the game. He is a master weapons crafter, and our resident rules guru.

Spencer Kelly: (GM) Spencer has been my “right hand man” for years now.  He has attended almost every event I have done for the past four years, acting as my teaching assistant, running missions, planning battles, organizing parties, crafted weapons, and is a skilled entertainer himself.  He has 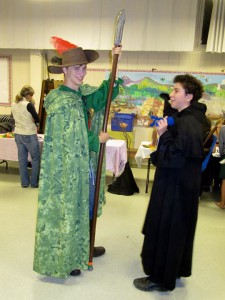 eight years of LARP experience, and has been helping me for seven.  He has worked as a performing arts teacher for children ten to seventeen for the past five years and has six years of PE training to draw on.  Spencer’s style involves an emphasis on having fun while learning about our game world, the game rules, and a consistent play format.  He brings his talents in improvisational comedy and theater into the game for an added flair which breathes life into his many roles.  Spencer is also a talented weapon crafter, and has been GMing consistently for the Roekron Junior League longer than anyone else.